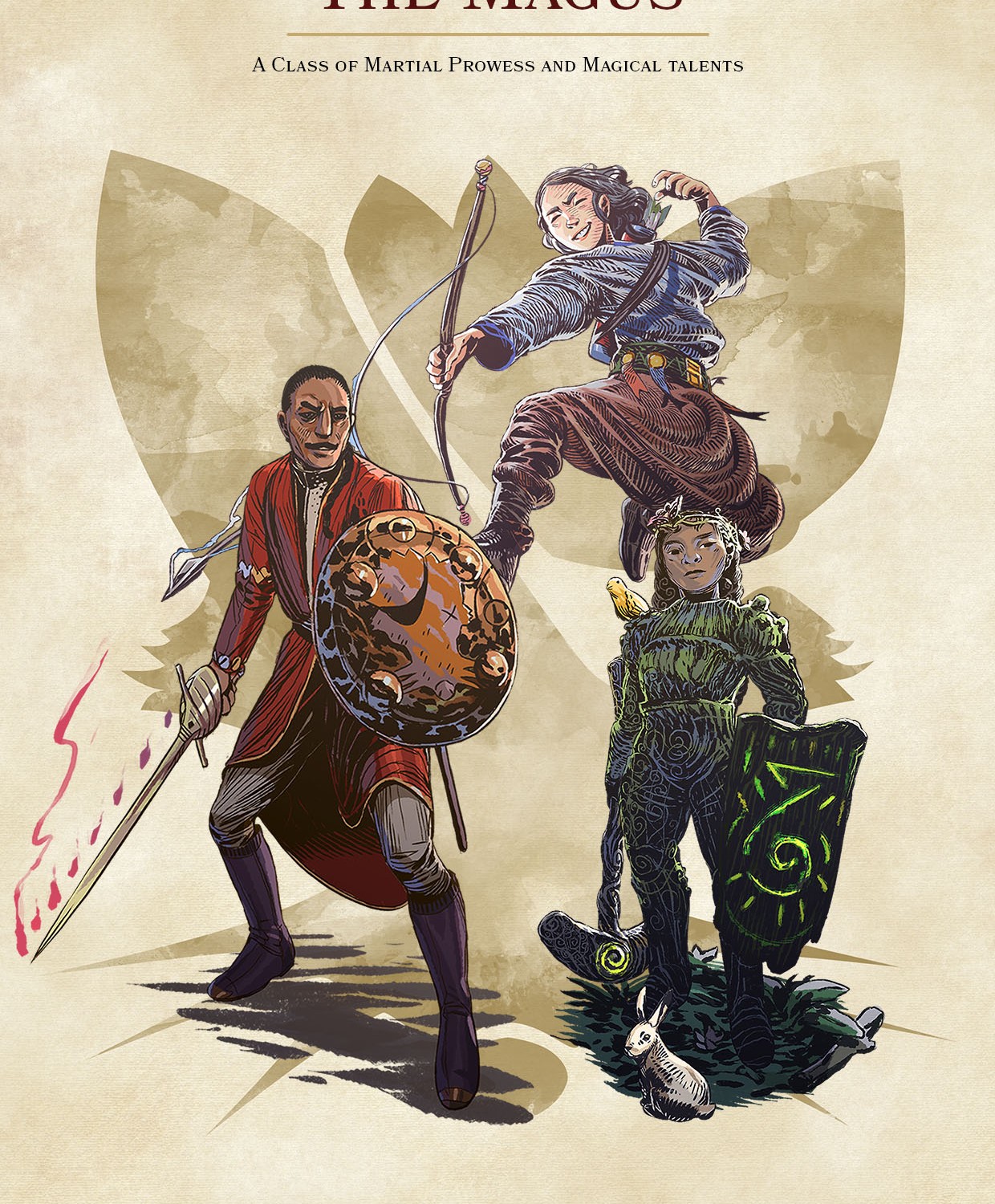 Today we’re celebrating the final stretch of design work on the Magus and the Sterling Vermin Adventuring Co.’s birthday!

First up, the Magus. The changes to the Magus in this draft were made with three goals in mind: simplifying / streamlining, balance (between Eldritch Societies and between the Magus & other classes), and style. To streamline some wordy features and spells have been simplified which makes them function slightly different but without a lot of unneeded complexity. To enhance balance I took a lot of the excellent feedback readers have provided and applied them to the Eldritch Society’s features & the spells I had created for the last draft (all spells created from the last draft were either rewritten or removed). To enhance the style I made weapon cantrips a new focus for the magus which was also something many readers were requesting.

One last note about this draft, the introduction erroneously suggests that the ability to cast cantrips has been bumped from 1st level to 2nd level – that is an error. In an earlier round of revision that had been the case and that vestigal sentence was left there. Sorry!

UPDATE: the Magus Class Now Available on the DM’s Guild

Now on to our 1st birthday! I’ll pull back the curtain a bit and let you in on a behind the scenes not-quite-secret – the Sterling Vermin Adventuring Co. is just two people. There’s me, Benjamin Huffman, the writer & game designer and there is my silent partner, /u/barkalot who does all of the layout & formatting & creates some of the art assets. Over the past year we have made a lot of cool stuff for D&D. The content I am most pleased with is the content we were able to put on the DM’s Guild thanks to the generosity of our Patreon backers whose support gave us the financial ability to purchase art for our projects.

By far the most popular thing we’ve created in the last year was the Pugilist. The Pugilist was also the first time we tried our hand at hiring artist to create original art for a project and – wow – project management adds a whole new layer of challenges to operating the Co! The Pugilist was such a success in terms of getting our readers excited that we also created additional Fight Clubs.

We published quite a few races this year, including the Beastfolk, the Dhampir, and the Pactborn. We walked a bit outside the bounds of published 5e concepts when we made the Vampire prestige class to celebrate Halloween.

One of the most interesting things about operating the blog over the past year has been seeing what kind of content gets people the most excited. This last year that content was easily our most popular (in terms of readership) was Critical Hits Revisited which got a whopping 6.335 views in a single day.

This post has been long-winded, and for that I apologize, but I want to end by thanking our Patreon backers, thanking /u/barkalot, and thanking you, our readers. If somehow you haven’t heard this spiel by now you can support us on Patreon, subscribe to our subreddit, and follow us on twitter.

3 thoughts on “the Penultimate Magus”